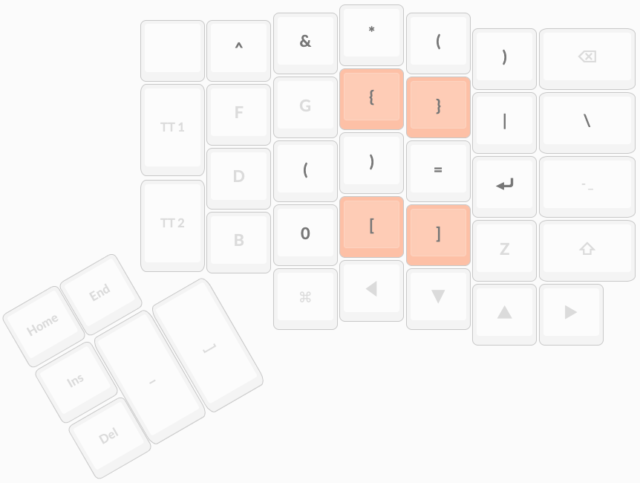 The left thumb’s space key acts as a layer modifier for the coding layer while held. The coding layer adds a shift modifier to all the numbers, and also changes the right hand to have the following layout (starting from QWERTY’s i key being {):

I think this works better for modern programming languages (C, C++, Java, Javascript, Python, Ruby, Swift) than the ZSA and BEAKL layouts. It optimizes frequent bigrams and trigrams by making them rollable without releasing the layer modifier. For example, ␣{⏎ is a single-direction roll, as are (), ({, ␣=, }), )⏎ and }⏎. The frequent trigram ␣=␣, while not a continuous roll, is all on home-positions. The layout also complements Dvorak’s left hand symbols: );⏎ can be timed as one stroke.

Subtly, these placements are meant to feel familiar to Dvorak users. I have short pinkies, so I type [0] on Dvorak by moving my whole hand slightly then hitting middle-index-ring with a single stroke; the same can be done with this layout. Similarly, I hit = on Dvorak with my ring finger; it’s still the same finger, but the home-row placement reflects the high frequency of = in code. \ gets put where it would be on a regular Dvorak keyboard, relative to the right-edge. Having ⏎ on the home-row pinky should also feel very familiar.

I think the layer modifier is also better placed (on the thumb rather than the pinkies) compared to ZSA’s layouts. This leaves all the other left hand fingers in relatively comfortable positions, and space is already covered by the right thumb.